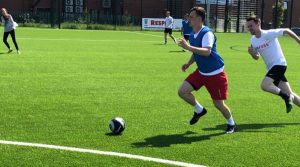 28 years ago, something happened that no-one ever thought could happen.

England reached the semi-final against West Germany in the Italia ‘90 and there was one person watching who would redefine the way we interact with technology forever.

1990 was not only the year when we reached new football heights; it was also the year that Tim Berners-Lee sent in his first proposal to create the ‘World Wide Web’.

The start of something incredible

Tim noticed that people struggled to share information in an easy, time-efficient way and, although millions of computers were already becoming increasingly connected due to the fast-developing internet, he decided he could share information in a better way by using a new technology called hypertext.

In March 1989, Tim laid out his first vision for his new World Wide Web and in 1990 it was officially launched creating an information system that allows documents to be linked to other documents through hypertext.

While all this was going on, England had finally done the impossible and made it through to the semis! After 90 minutes, both sides were level and we played on through extra time to penalties where the match would be lost or won. And unfortunately… we lost.

A few years later (and a few lost World Cups later) in 2018, the World Wide Web is now used by everyone to do anything at all: from browsing, to using social media, to watching videos of pandas sneezing on Youtube. All because Tim Berners-Lee decided he could fix the problem and make the internet better. And much like Berners-Lee, the England football team, managed by Gareth Southgate, has decided to come back and do one better than the 1990 England team and, hopefully, carry us through to the finals.

At UKFast we believe in helping people to problem solve, boost their creativity and we are always looking to improve the make processes better, just like Tim Berners-Lee and the 2018 England Football team.

Last week, the UKFast team were cheering at our custom-made beach as they watched the big England v. Colombia match. Find out what what else UKFast does for its people.