A working office has decided to test out a new way of delivering data by using the visible spectrum rather than radio waves. In shorter terms; Li-Fi rather than Wi-Fi. Lowri takes a closer look. 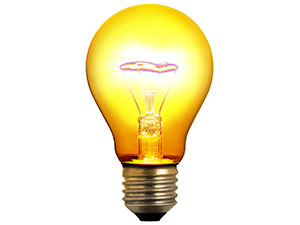 Li-Fi is said to deliver internet a whopping 100 times faster than traditional Wi-Fi and all it seems to require is a light source, internet connection and a photo detector. The term was coined back in 2011 by Professor Harold Haas from Edinburgh University, who demonstrated the lightening-fast technology at a TED conference (Technology, Entertainment and Design).

The new discovery was then tested in the offices of Velemmni, an Estonian startup in Tallin, where a Li-Fi-enabled light bulb was used to transmit data at speeds of 1Gbps. Chief executive, Deepak Solanki, told the International Business Times that the technology could be in the hands of consumers in as little as three to four years’ time.

A pretty great advantage of Li-Fi is the fact that it doesn’t interfere with radio signals, like Wi-Fi does, so it could potentially be used on aircrafts in the near future. Li-Fi is also unlikely to run out any time soon, as the visible light spectrum is 10,000 times larger than the current short supply of radio waves.

All seems pretty good so far, however a slight disadvantage is that Li-Fi cannot be used outdoors as direct sunlight may interfere with its signal. And, rather unfortunately, the technology cannot actually travel through walls so its use is likely to be restricted to an add-on to Wi-Fi networks.

The Need for Speed