Whether you’re counting on the Conservatives, are hoping that this country will be the bacon sandwich for #Milibae to sink his teeth into, or want a completely new party to emerge, many of you will be on your way to vote today. But the question is – with only just over 60% of the population voting in the last election – would more vote if we could do it from the comfort of our own sofas, or is it a risk not worth taking? 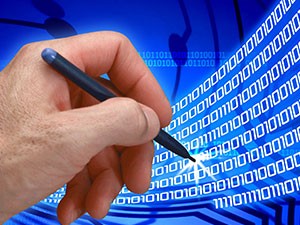 E-voting has been discussed for a while now, but for various reasons – and after a few false starts – hasn’t be implemented yet. It’s a good idea in theory and many argue that it might encourage younger voters to engage when, in an increasingly digital world, actually dragging ourselves to the polling stations may seem uncharacteristic and crazy.

It’s an idea that definitely has some support too. Two thirds of respondents to a WebRoots survey said they would be more likely to vote if they could do it online – it’d also cut the cost per vote by a third and reduce accidentally spoiled ballots, according to the report. Although you can already vote by post it’s still a bit of a faff, and voting remotely could make a big difference to people who struggle to get to polling stations, like the disabled.

There’s precedent too; Estonia has been using online voting for a decade and although the initial uptake was small at 1.9%, it’s grown each time to 30.5% this year.

However, there are also a whole heap of issues piling up around it. Firstly, making sure that the process itself is secure is vital. Jason Kitcat – leader of Brighton and Hove City Council – is wary of the process. He says the three things a good election needs are security, anonymity and verifiability and that “Meeting those three requirements is a very difficult problem quite unlike other transactions.

”Online banking suffers problems but refunds are possible after checking your bank statement. You can’t ‘refund’ a vote and ‘vote statements’ can’t be provided to check your vote was correctly recorded as that would enable vote selling and coercion.”

There are ways to improve the security, but whether it’s foolproof is another thing. In Estonia voters get a government ID and scannable chip and PIN for their online identity. They then encrypt the votes once they’ve been cast, but some say it’s still vulnerable to hacking. Especially with something like this, foreign governments invested in an election coming out a certain way could potentially hack the system, and in a climate where cyber threats are growing it’s a helluva motive.

It would also need to be a streamlined service – some online voting was attempted in the 2003 elections but technical issues meant it was mostly taken back offline. Whether enough of the population has reliable internet access is another concern.

Finally, it would need to have the infrastructure in place to cope with a single day of incredibly high traffic. When the DVLA moved tax renewals online last year the site crashed immediately because it couldn’t support the number of people trying to use it; seasonal spikes in traffic are important considerations for any business building a website!

The WebRoots report says online voting will ‘future-proof’ elections, but there are still lots of fears surrounding it, and whilst some say that 2020 could be the year to take voting into the 21st century, there are clearly a few things to work out first. What do you think – given the option, would you vote remote?

For more information about the tech behind our solutions, take a look at our website or give us a call on 0208 045 4945.