How to Conquer a Country: Tips for Startups

If you’re eating a big meal – a burrito, say – you’re going to want to eat all that deliciousness in one go. But sometimes – if it’s a GIANT BURRITO for instance – then that’s not going to work. Whether you’re facing a long list of tasks, breaking into a new target market, or simply eating a giant burrito, you just have to take it one bite at a time. 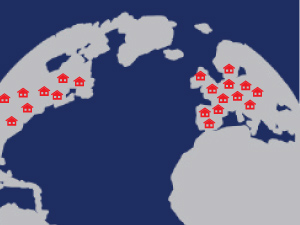 The same has been found for startups. If you’re a business trying to break into a new demographic – another country, for example – then it turns out that rather than being all ‘HEY AMERICA I’M HERE’, the way to do it is city by city, tailoring the services to the immediate target market. For instance, if you’re in London, you want to know about the transport services in London; and if you’re in San Francisco you probably don’t care so much about what events are on in New York that night.

Startups that have successfully broken into other markets often start off in one, very focused area, and fill the need there, and then – if they can – apply it to other cities too. For example, Azmat Yusef, the founder of CityMapper came to London and found it hard to navigate the complicated underground system and sprawling bus network; so he created an app that gave alternative route options, and real time bus and train information. Now they’ve expanded to include New York, Boston and Washington, and have set their sights on Hong Kong and Singapore next. “We paid attention to the details that people wanted in each city,” said Mr. Yusuf, who said he took lessons from London’s bike-share system and applied them to other cities.

YPlan, a smartphone application that helps people find events, is also focusing on a few, select cities like London, New York, San Francisco and Las Vegas; and they’re looking to introduce a version for Los Angeles by the end of June.

“You have to take things city by city, not country by country,” said Rytis Vitkauskas, one of the co-founders of YPlan. “To succeed in the U.S., you have to focus on what people want in their local markets.” This is especially true of the US, where you have such a huge, varied market, with pockets of specific innovation, like the tech hub in San Fran’s Bay Area.

And it makes sense. When you’re applying for a job or pitching an article, rather than just casting a wide net and hoping you’ll catch a few fish in the corners, it’s best to tailor what you can offer to suit the demographic that you’re targeting. And by taking a country over, a city at a time, you can conquer it more easily, and employ a successful startup strategy.

What tips do you have for startups entering a new target market?