Is the Internet Stealing your Productivity?

As it turns out, the internet is bad for productivity. This probably doesn’t come as much of a shock to anyone; we’re all familiar with the desire to check our emails constantly because we’re very important, even though we’re meant to be working or making big life decisions. But now that it’s been proven to decrease productivity maybe we should think about all the time we could spend learning the ukulele and stuff, instead of messing about on Reddit. 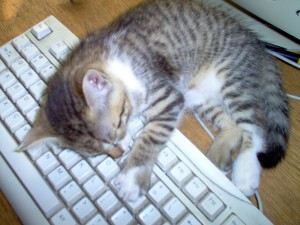 There was a time when everyone wanted to get online. And in fairness, now it’s even more invaluable for our everyday lives – both in work and out. But now it seems that what we really want is to disconnect for a bit, giving us a chance to reconnect with our lives. A new survey has found that the internet ‘fuels procrastination and lowers productivity’; and if you’re anything like me, procrastination was already your favourite thing. Which probably explains why I’ve never finished that award winning novel.

What the study found

Half of the 2,500 participants surveyed by motivational aid site Webtrate said that checking emails and social media when trying to work revealed a worrying lack of control; and 63 per cent said they lost their chain of thought because they checked and responded to an email or social media alert while they were working on a longer piece of written work. Checking emails and social media meant 36 per cent of respondents lost more than an hour each day in productivity and 62 per cent of them reckon they felt less satisfied and happy when they realised they’d been wasting time browsing.

Whether it’s cats playing keyboards, the latest news or getting life-jealousy rage on Facebook, the internet just gives us too many options for distraction. One solution is to try a few self-imposed black-outs. Have one day a week – or even a few hours – where you don’t check any sort of internet. For a little extra motivation, make a game out of it; a colleague was telling me that when he and his friends go to dinner they all put their phones in the middle of the table – the first one to cave and look pays the bill.

Luckily there are lots of sites out there that are designed to get rid of the distraction of the pesky internet. Here are a few to get you started:

What techniques do you have for staying productive on the internet?