If you were going to have a superpower, having the ability to speed read would be a great one… if things like flying, and collecting unicorns were already taken. Speed reading would probably be handier for everyday life anyway, so luckily you don’t need to wait for the B-list superpowers to come round; there’s now a site that helps you read at up to 500wpm. If, like me, you didn’t have a clue how fast that is, it’s a lot (over 60% faster than usual). 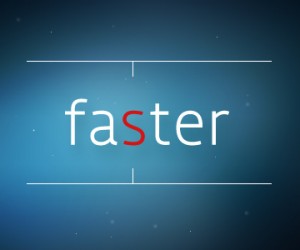 Spritzinc is a Boston startup that’s revolutionising text streaming tech and its integration into modern communication. They’ve found a way to make it easier for us to read faster; at 500wpm you could read a full book in hours, and that – as anyone who’s ever tried to read Lord Of The Rings will know – can save you a load of time. It’s also been shown to increase retention and comprehension, making it a potentially game changing way of reading.

What slows us down and tires our eyes when reading is eye movement – 80% of reading time is taken up with moving your eyes, and only 20% with processing content – which Spritz has managed to eliminate. There’s a more sciency explanation on the site but basically by having a focal point the brain’s able to recognise and process the word faster. Some dyslexic people and people with ADD have reported it helping them too, suggesting possibilities for it to help people with learning difficulties.

It can be learned almost immediately; the programme basically does the work for you. It also takes up less space on the page, and means that if you’re trying to read something on a device you don’t need to make the resolution smaller to fit it all in. As Spritz say, “Scrolling, pinching, and resizing a reading area doesn’t fix the problem and only frustrates people.” I can’t count the number of times I’ve nearly raged out trying to read a document on my phone.

Most of the work done when spritzing is just text processing, meaning that it can be done fast and doesn’t use up too many resources. The company’s currently working to get Spritz fully released, and are looking at lots of different platforms, from SMS to social media, and on different devices too. Spritz aims to have 15 per cent of the world’s textual content read using its method by 2016,  and is currently seeking developers to make the content more widely available.

Potentially the most intriguing aspect though, is what it could mean for businesses and our working lives. Could we learn faster? The time that it frees up could be invaluable for learning skills faster, becoming more productive, or just generally doing more valuable things! At the end of the day if it gives us more time and capability to learn, in this day and age, that’s an invaluable gift.