5 Reasons To Be Happy You Survived Blue Monday

I want to give you some good news; yesterday was apparently the most depressing day of the year. And you survived it! 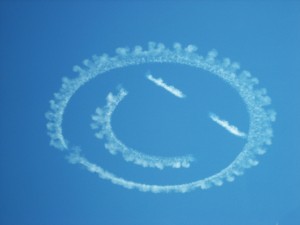 Scientists (aka the marketing team at Sky Travel) came up with this lovely piece of maths:

Basically an unholy combination of badness. But to be honest, I’m not a fan of maths. So today I wanted to compile a couple of happy things to offset yesterday’s blues; today is a good news day.

While this isn’t the first time this has been trialed (Microsoft did a version in 2011), Google is getting closer to releasing the tech of the future: smart contacts. This won’t transform your eyeball into a robot (which would either be cool or creepy, not too sure!), but for diabetics this could help them keep track of their glucose levels which could potentially be life changing. The next step is FDA approval and getting the tech ready for controlled clinical trials.

Free music for everyone!

Spotify has finally lifted time and play restrictions on its free desktop player, making free music more accessible. You still have to listen to ads but it’s nice to see a company not just trying to shamelessly push you toward their paid service, so we’re calling it a win for now.

Tiny windmills could one day charge your phone

Windmills the size of a grain of rice are being developed that could one day power your mobile. In the UK we certainly have enough wind, and attaching a cluster of them to your phone and shaking it could even work too. It’s still in the earliest stages of development but if it came to market not only is it useful, it’s also kind of adorable. (You’d just have to be careful not to lose or sit on them!)

Children’s artwork could be the key to their security

Internet security for children is a massive concern of any parent, or anyone who’s had their phone grabbed by an errant small-person. Luckily, for the sake of our kids and our stress levels, the BBC is starting to explore a child-friendly password protected products, based on their artwork, and a way to offer tailored services without collecting data. The pilots are called Eezl and Predicto, and are something kids might actually enjoy too!

Apple will now fix your 5c screen in store

For the clumsier among us (me), at some point you will almost certainly have experienced the smashed smartphone screen. But, if you’re an iphone 5c user who’s fed up of picking shards of screen out of their fingertips and trying to figure out exactly what that important email hidden under the 3 inch crack says, you’re in luck. Starting this week Apple’s finally offering in store screen repairs or replacements at any Apple store – hopefully this will soon extend to other models too!

For anyone who missed it last week, our happy Manchester video will get your week off to a great start!

So, congratulations – if you’re reading this you made it through the most depressing day of the year; and it’s only getting better from here.