Trending Tech: What is Ultra-Haptics?

It’s a tech advancement reminiscent of scenes in the film Minority Report where Tom Cruise is seen moving information across a screen without touching it, using a pair of special gloves! But what is ultra-haptics and is it a Hollywood worthy breakthrough? 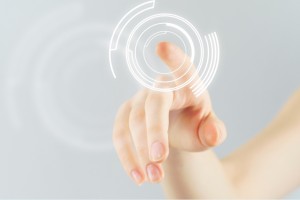 Researchers at the Bristol Interaction and Graphics (BIG) group have developed a way of using ultra-haptics to create touch screens that you don’t actually need to touch!

Most of us are familiar with haptic feedback, which is used in smartphones and game controllers. When using a controller, for example, users are often able to feel resistance or vibration when their character in the game does certain things. These sensations are created using haptics, making the gaming experience more immersive and realistic.

The BIG website describes ultra-haptics as a “system for creating haptic feedback in mid-air.” To explain the process, it states that “waves of ultrasound displace the air, creating a pressure difference. By causing many waves to arrive at the same place simultaneously, a noticeable pressure difference is created at that point. With this method, we are able to create multiple, concurrent points of haptic feedback in mid-air.”

Tom Carter, one of the PHD students working with the BIG group suggested some of the possible uses of ultra-haptics, including car satellite navigation systems, as he explained: “Even if you provide haptic feedback on a touch screen you have to fumble around pressing all the buttons, whereas with our system you can wave your hand vaguely in the air and you’ll get the feeling on the hand.

“We can give different points of feeling at the same time that feel different so you can assign a meaning to them. So the “play” button feels different from the “volume” button and you can feel them just by waving your hand.”