In the second of UKFast’s Geek Week series of Geeks Who Changed the Internet, we pay homage to the chap who transformed the way we communicate and the man who was to become his nemesis. 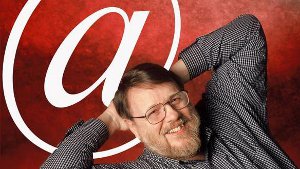 In 1971, Raymond Tomlinson invented something that would revolutionise the way the world communicates. At the time, he had no idea how what he described as ‘insignificant’ would change the web as we knew it. When Tomlinson showed the first ever email to his colleague at BBN Technologies, Jerry Burchfiel, he said “Don’t tell anyone! This isn’t what we’re supposed to be working on.”

Tomlinson, then a programmer at technology company of Bolt, Beranek and Newman, now BBN Technologies, helped develop the TENEX operating system including ARPANET Network Control Protocol and TELNET implementations. He added code taken from his earlier creation CPYNET to SNDMSG so that – for the first time ever – messages could be sent to users on other computers.

This email software was widely distributed for many years and he is widely known for inventing network electronic mail, choosing the “@” sign in emails to connect the username with the destination address.

Tomlinson was also instrumental in the other aspects of email as we know it, including developing the idea of an ‘inbox’, a mail transport agent and a protocol to move email between machines, setting a standard format for email messages, and designing the tool to actually create and read the messages.

Email is now the central communication channel of modern businesses to the point where many companies simply couldn’t function without it, something that Tomlinson clearly was unaware of when he sent the first message. This message he describes as insignificant and commented that the “test messages were entirely forgettable and I have, therefore, forgotten them” but that the first message was “something like QWERTYUIOP”.

Tomlinson has received many honours and accolades throughout his esteemed career including a lifetime achievement Webby award from the International Academy of Digital Arts and Sciences and, this year, being inducted into the Internet Hall of Fame by the Internet Society.

While paying homage to the King of Email, it is the perfect opportunity to give a nod to the man that transformed the way we use the communication tool. In 2011, 42 billion emails every day were spam – that’s 75.1% of all emails sent, according to Symantec’s latest report. In May 1, 1978, marketing manager Gary Thuerk sent the first ever spam mail.

Thuerk, then a marketer at Digital Equipment Corp, sent the first mass email to 400 customers over the ARPANET. He says he only received a few complaints and “the best complaint came from a guy at the University of Utah, who said when he got in the office in the morning, he couldn’t use his computer because the spam had used up all his company’s disk space.”

Although Thuerk himself prefers to believe that he was the inventor of targeted e-marketing he does describe himself as the Father of E-Spam on his LinkedIn profile and interestingly has an industrial strength spam filter on his email account.