HTML5 at a Glance

As users demand more interactive experiences and web apps become the norm, HTML4 is no longer fit for purpose, but HTML5 is here to save the day. 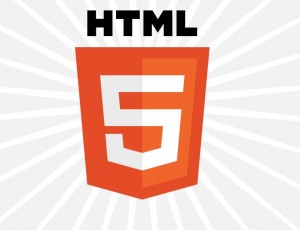 HTML5 is the latest version of the language that web pages are written in. HTML (hypertext mark up language) is a markup language, rather than a programming language, which describes the web page for browsers to translate and provide the end user with a full browsing experience.

HTML is the core of the internet, but the current version HTML4.0.1 is fast being pushed to its limits by the demand for cross-platform multimedia, interactive browsing experiences and JavaScript-heavy web apps.

The solution to this is the introduction of HTML5. The latest version of the markup language builds on HTML4 and XHTML, improving the language by adding semantic meaning to elements and adding native support for multimedia, form validation, as well as new device APIs for accessing things like the microphone or a camera.

HTML5 – along with NEWT (New and Exciting Technologies – as coined by Opera evangelist Bruce Lawson) – that have been bundled under the W3C’s HTML5 umbrella and include WebSockets, geolocation and CSS3 – is set to revolutionise the web as we know it.

HTML5 is a work in progress so new features and capabilities are continually being developed and added. Although work began on the new HTML standard in 2004, it is not expected to receive Recommendation from W3C until 2014 but don’t let that stop you from experimenting with it now.

HTML5’s new features make integrating multimedia into webpages much simpler, when HTML5 becomes the norm, adding music or videos to a webpage will be significantly simpler and will no longer require the use of third-party software like Adobe Flash.

Additionally, many aspects of the language have been simplified within the new standard. For example, all HTML documents should have a doctype specified so that the browser can render the page in the correct way. For most sites this is ‘in standards mode’, and previously required a long, hard to remember declaration, usually with a url to the standard implemented.

The <canvas> element is used for rendering dynamic bitmap graphics on the fly, such as graphs or games. The canvas element is only a container for the graphics – JavaScript must be used to draw the actual images.</canvas>

What difference will HTML5 make?

HTML5 makes web pages more semantic and easier for search engines and screen-readers to understand the content contained within an element. Combined with the new JavaScript APIs and CSS3 it will give everyone a much better browsing experience overall.

As HTML5 is built on its predecessor, site owners making the transition to the new standard can keep the old markup in place while new features are being developed.

Not only will flexibility increase but also, by using HTML5 and NEWT, page load speeds should improve drastically too.

One of the key points to note when looking at HTML5’s effects on the web is its compatibility with mobile platforms. As there is no need for plug-ins, webpages are compatible cross-platform (think Flash and iOS) so mobile webpages are instantly more accessible. Additionally, mobile apps written in HTML5 will not need to be individually written for each specific platform, one universal app can be created for all types of devices including phones, tablets as well as desktop machines .

When will we see HTML5 make an impact?

Although still in its infancy, HTML5 is already making changes across the web. YouTube is currently trialling a HTML5 video player on its site and many businesses have already redeveloped their sites using the new markup, take this fish and chip website as an example of the freedom that HTML5 brings to web developers.

It is expected that W3C will officially approve HTML5 sometime around 2014, but some say this date is more likely around 2022. This isn’t likely to discourage developers from embracing the new markup, take CSS2.1 for example, which had been in wide use for years before receiving the W3C’s stamp of approval.

HTML5 has already pushed forward a shift in the way that sites are now being built, whereas developers would previously wait for browsers to support something before using it, now this is no longer a factor holding back website innovation.

Web developers are moving to feature enhancement where browsers support it if they can and accepting that the browsers that don’t support it, don’t. Taking rounded corners, for example, they can be done in CSS but are not compatible with Internet Explorer 6 or 7. This hasn’t stopped sites using rounded corners, it is simply accepted that old Internet Explorer browsers will have square corners.

Bearing this is mind, now is the perfect opportunity for developers to play with HTML5 and see how it fits into their development cycle as they start introducing it. It is expected that this time next year every site will be HTML5 based, clients will be asking for it and browser vendors are currently pushing it like mad, so web developers need to be on top of the game and site owners can be ahead of the game embracing the new technology as it grows.