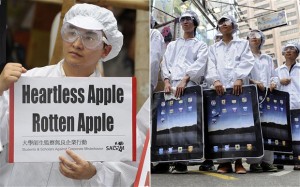 Hacker group, Swagg Security leaked the login details of Foxconn’s entire staff on Thursday, including the CEO of Foxconn’s parent company Hon Hai Industries, Terry Gou, and a mass of other sensitive information on The Pirate Bay and Pastebin websites.

The hack, publicised in a series of tweets, joined the building protests against the company’s poor factory conditions. The hack coincided with the release of petitions demanding an ethically-made iPhone 5 – the new model is expected later this year – at Apple stores in London, New York, San Francisco, Sydney and Bangalore.

More than 250,000 people have signed two of the petitions, organised by campaign platforms SumOfUs and Change.org.

“Everyone here is an avid Apple user, we just want to ensure those products are made in working conditions that are ethical and fair and safe,” the UK campaigns director of Change.org, Brie Rogers Lowery (who delivered four boxes of signatures to Apple’s Regent Street store) told the Guardian.

“Finding out about the conditions under which iPhones and iPads are produced makes me disturbed to own one. We are hoping to push Apple to set a precedent for other technology companies.”

Media exposure of suicides, deaths from explosions, maimings and long shifts at factories assembling Apple products has led to mounting pressure for the technology giant to improve conditions for workers at Foxconn and other suppliers.

Swagg Security released an anonymous letter to Foxconn saying: “They say you got your employees all worked up, committing suicide ‘n stuff … Your not gonna’ know what hit you by the time you finish this release. Your company gonna’ crumble, and you deserve it.”

Apple’s chief executive, Tim Cook, who masterminded the company’s supply chain before succeeding Steve Jobs at the head of the company, said last month he had never turned a blind eye to working conditions.