Internet users are desperately seeking an escape from the bleak times of the recession according to the 2011 ‘Zeitgeist’ chart by Google. 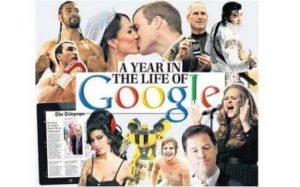 The search-behemoth has released its annual list of the most searched for terms . Looking at it overall, the overarching theme seems to be avoiding the harsh reality of the recession.

The lists, as per usual, are plagued with celebrities and people ‘living the dream’. US reality star Kim Kardashian tops the chart for celebrities no doubt thanks to the media frenzy since her 72 day marriage. The only male entry in the list is Ricky Gervais – due to his controversial hosting of the Golden Globes.

The crown for the fastest-growing search term goes to the royal wedding; a ‘rags to riches’ tale of the middle-class girl made royalty – though it surprisingly doesn’t appear in the top ten searches for the UK.

Technology featured fairly heavily in the list, behind all of the celebrity fluff. The non-existent iPhone 5 comes behind Kate and Wills’ nuptials as the second fastest rising search and featured in the top ten news searches. The iPad 2 also ranked highly, as did its predecessor last year.

The alternate reality of video games made a prominent showing in the lists: Fifa 12 trails the iPhone 5 in the fastest rising searches, and Minecraft places as the eighth fastest rising.

The food and drink chart offered a further reminder of people’s handling of spiralling costs and less money, with Asda – reportedly the cheapest of the big supermarkets – topping the list.

Escaping the recession through less realistic means also popped up, with the top holiday destination search being Las Vegas and the top TV shows as X Factor and The Apprentice.

Politics did make a little appearance with the top ‘what is’ search asking what is AV? Its pusher, deputy prime minister Nick Clegg, didn’t feature so favourably; he sits on top of the fastest-falling people chart.

Unfortunately Google itself appeared in the top UK searches list – coming in fifth place. Other ‘functional’ searches in the top tens are Facebook, YouTube and Hotmail.

A Google spokesperson explained to the media that the search-giant reveals the web’s trends “through an exploration of the billions of search queries we receive each year. In addition to the year-end Zeitgeist, which highlights the top trends of 2011, we have several tools that give insight into global, regional, past and present search trends.”

And finally the ‘what is?’ and ‘how to?’ entries bring a lighter mood to the lists with entries including ‘how to snog’, ‘what is scampi?’ and ‘what are piles?’.