Microsoft has confirmed that Windows 8 will feature an ‘apps store’ and has offered a sneak peek into the new development. 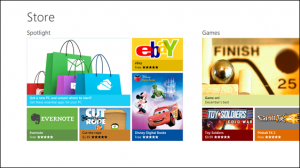 The news of the Windows store comes just over a year after Apple announced the launch of an App Store for their desktop computers, which was launched this January.

In a post on the newly launched Windows Store blog, Ted Dworkin, Partner Program Manager for the Store, described the design ideas behind the new store. He said: “Ensuring the visibility of apps and the efficiency and fluidity of app discovery became the fundamental building block of our Store design.

“We use minimal chrome so apps shine through, and complement the apps with a series of way-finding and promotion mechanisms—search, category browse, ranking lists, editorial curation — to help people find great apps.”

The software giant will initially give developers the ‘industry-standard’ 70% share of any revenues, keeping 30% – which is the same as Apple initially instituted on the iPhone App Store. However, Microsoft has pledged that once revenues pass $25,000, the split will shift to an 80-20 split for the lifetime of the app on the store.

In the blog post, Dworkin continued to explain that four guiding principles have been developed to maintain the best partnerships between Microsoft and app developers.

These principles describe how apps should be designed for discovery, have flexible business models and transparent terms and offer the best economics.

The Windows Store will be available on PCs, laptops and tablets running the Windows 8 operating system. They did not disclose plans for mobile devices; however the Windows Phone platform already has its own app store called Marketplace.