This rumour has been going on for a while now, but as it starts to look more like a reality, it just makes me think how massive this news could be! If Facebook also became our personal email system, this would really cement their presence as leader alongside Google and Microsoft.

Last weekend, I went to watch “The Social Network” at the cinema with my girlfriend (highly recommended by the way, 4 stars from me!) and I just thought that Mark Zuckerberg came across as such an ambitious person (although maybe slightly sad). It was really a story of world domination in a way, Facebook has become such a modern social phenomenon that in a reasonably short amount of time, it has also become extremely influential online.

Email integration into Facebook is just common sense really and it even makes you think, why hasn’t this been done before now?! What this has made me realise is how the big players online seem to be trying to compete in so many different sectors now. If you think about Microsoft, they are in Search (with Bing), Operating Systems (Windows), Office Software (MS Office), Gaming/TV/Internet/Social (The Xbox), Mobile, Productivity Software (Calendars, Outlook, CRM…). The list goes on and on…

Then take Google who have GDocs, GCalendar, Gmail, Chrome (soon to be an OS too), Buzz, Mobile, Search (really?!), TV (in partnership with Sony I believe) and again the list goes on… 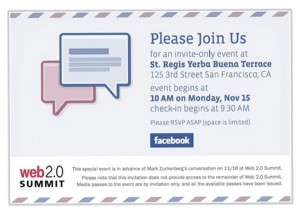 Facebook is also a big contender for all of these markets. It was rumoured they were to bring out a phone but whether or not this amounts to anything, the site is attracting 400,000 new users a day! Having seen the movie now, it has just emphasised for me how ambitious Zuckerberg and Facebook are and this is just a natural step for them. Their influence on the technology and computing industry is incredible, they have changed the internet and will no doubt continue to do so in the future, starting with this addition.

A Facebook press event is going on today in California and no doubt a lot of people will be looking out for any breaking news that comes from there. We will keep you updated in our news section with any big changes.

Some may think it is slightly worrying that such few players are playing such a pivotal role online. Others may be thinking that this rivalry is extremely healthy as they constantly push to innovate and improve the services they provide. Either way, I’d love to know what you think of this event and the impact it could have on Email in the future.