As mentioned in the previous post on this months security bulletin releases, there are confirmed to be 10 bulletins addressing 34 vulnerabilities. Refer to this page for details on all updates released this month.

3 have a severity rating of critical and an exploitability index rating of 1 – see below for deployment priority chart.

Following on from the previous posts, we are expecting mandatory reboots for 2 of the updates released to be automatically installed this week (MS10-035 & MS10-032).  Both of which affect pretty much all commonly deployed Windows operating systems (see links above for details).

All remaining updates are listed as ‘may require restart’ which commonly means that they will indeed require a restart. 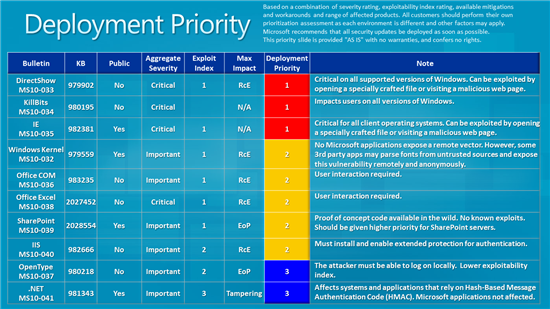