Wine – the Linux Drink of Choice

So, as my ongoing quest to expand the Linux user base continues, I want to mention the middle ground people often get stuck in. It’s often perceived as a no-mans lands between the two waring sides, however there is a “bridge of peace” between the two so to speak. This comes in the unexpected form, of a much enjoyed tasty drink: Wine.

OK, obviously I lie, Wine is actually a program which lets you run Windows software in Linux. For many this idea seems a bit crazy – in most respects Windows & Linux are so different just running a program built for one OS, out of the box on the other is pretty much inconceivable.

So before I go further, let me just give you the proper definition of Wine, as taken from the development team’s website: Wine HQ.

Wine is a translation layer (a program loader) capable of running Windows applications on Linux and other POSIX compatible operating systems. Windows programs running in Wine act as native programs would, running without the performance or memory usage penalties of an emulator, with a similar look and feel to other applications on your desktop.

There’s one little line in that definiton that gives rise to Wine’s name, “without the performance or memory usage penalties of an emulator“. Wine stands for (in the classic Linux Recursive Acronym way): Wine Is Not an Emulator. Now I’m not going to go into the details of how it works, but you can consider modern versions of wine as almost stripped-down versions of Windows.

And there are actual real life examples of this – Windows application which run better on Linux than on their native OS. Yes, programs never designed to run on Linux, actually performing better on the same hardware. 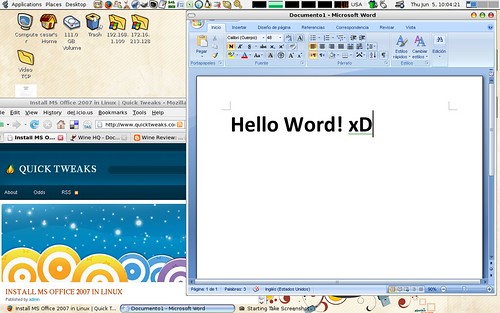 Now being a true Linux advocate, I’d always prefer running software developed by the open source community. However I also understand sometimes you have no other choice – which of course is what drives the development of Wine. The biggest driving force of this development – Games. There was big fanfare when tests showed Quake 3 out performing the native Windows version.

However over here at UKFast the call of Wine in day-to-day use is not great, indeed generally in the world of high-spec Linux servers, running Windows software is not needed. But the simple reason I wanted to discuss it was to help people try, and eventually full-migrate to, Linux, and as my previous post said – Submerge Yourself in Linux.